The Beagle is the second breed of dog and third predator overall unlocked in Survival Mode. In Story Mode Beagles are at war with the Tosas.

The Beagle is a small to medium-sized dog breed and a member of the Hound Group. Beagles are primarily scent hounds, developed for tracking hare, rabbit, and other small game. Beagles are popular pets due to their intelligence, size, even temper, and lack of inherited health problems.

Life as a Beagle

The Beagle is the first Non-DLC size 3 predator it is possible to play as. While most of its stats are below average for a size 3 predator, it does boast the highest base stamina for its size class, not counting the over-powered ERC-X. This can help compensate for its low average speed while chasing prey or fleeing foes.

The Beagle is a species that is likely to fight back over running away. In smaller species, such as the Pomeranian, this can provide a challenge in a one on one battle, which is not usually the case. The Beagle is likely to call a two more beagles to help in battle, and for smaller predators, this can cause problems. For smaller predators, it is best to sneak up on the Beagle and Clean Kill it. Mid sized predators may have some trouble with a pack, but nothing horrible if handled properly. The Beagle will not stand up to a larger predator if the battle is handled properly.

Side Note: The Beagle female has a set equipment: Pet Harness. It is one of the few animals who has a female with a difference, other than the deer who have separate male/female skins.

A beagle and a lion in the Story Mode.

The beagle in the selection screen. 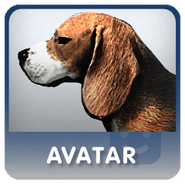 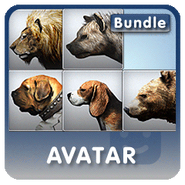 An avatar bundle that includes the beagle.
Add a photo to this gallery
Retrieved from "https://tokyojungle.fandom.com/wiki/Beagle?oldid=7632"
Community content is available under CC-BY-SA unless otherwise noted.