The chick is the smallest animal playable in the game.

A chick is the juvenile stage of a chicken. A chicken is a domesticated fowl and probably the most common and widespread domestic animal with a population of more than 24 billion. Humans keep chickens primarily as a source of food, consuming both their meat and their eggs.

Life as a Chick

The Chick is the first size 1 grazer it is possible to unlock. When the player first spawns as a Chick, it is notable that it has the lowest base Attack, Speed, and Defense of any animal in the game, hampered further by the fact it is only size 1, and unable to clean kill even the smallest of predators. The Chick does, however, share a trait only otherwise seen in the Lion: A juvenile form.

Once a chick has managed to mark a territory, it can use the nest to sleep, at which point it will grow into an adult rooster. While its increase in Life and Attack is marginal, it will now have a high average speed, making it easier to flee or avoid predators. It can also now seek out a mate and change generations, at which point you will return to the juvenile form as the chick to repeat the process. Unlike the Lion, there is no ranking advantage to being a Chick, and it is best to seek a nest as quickly as possible.

Due to the added challenge of its juvenile stage, the Chick's low stats, and its size, the Chick as widely considered the most difficult animal to play as in the game. Some of the more hardcore players will often attempt to test their skill by taking the Chick past the full 100 years.

Chicks and Chicken are among the most common grazers seen throughout the early years, especially around the southern territories of Shibuya. Chicks are easy targets for even the smallest predators, but offer very little in the way of calories. What they lack in calories though, they tend to make up for in numbers.

A chick tries to sneak up on a Deinonychus. 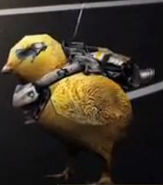 A chick with the Chick Power Suit equipped.

The chick can be seen just above and in front of the cat, Deinonychus, and elephant.

The chicken, the adult form of the chick.

The Japanese banner for the chick, which translates into, "Chick: Survival against the Odds."
Add a photo to this gallery
Retrieved from "https://tokyojungle.fandom.com/wiki/Chick?oldid=8050"
Community content is available under CC-BY-SA unless otherwise noted.