The Dilophosaurus is the last predator unlocked in Survival Mode.

The Dilophosaurus, meaning "two crested lizard", is a carnivorous theropod dinosaur that lived in the Early Jurassic Period, 193 million years ago. Dilophosaurus had a pair of rounded crests on its skull, made up of extensions of the nasal and lacrimal bones. Dilophosaurus had 12 maxillary teeth and as many as 18 dentary teeth, and the teeth were smaller in the tip of the upper jaw.

Life as a Dilophosaurus

The Dilophosaurus is the only size 6 predator in the game. It is on par with the fastest animal in the game and has the best base Attack and Stamina of any other predator, excluding the over-powered ERC series. While its base life is reasonably low for its size, the biggest issue is its base Hunger, being lower than any other animal in the game. With half the hunger gauge of a Deinonychus, the Dilophosaurus will need constant feeding, but luckily it is designed to be as competent at chasing down fleeing foes as it is in open combat. Its attacks are quick and devastating, breaking the defense of even the toughest foe in little time. While it may still struggle with larger groups of adversaries in early development, it will quickly become an almost unstoppable killing machine.

While very rare to spot early on outside of Events or the Underground Facility, after the 61st year the Dilophosaurus will become extremely common throughout almost all territories, with the only break being the Sewer. Like with the Deinonychus, most animals must think fast to avoid it as its speed makes it extremely difficult to outrun. Small animals can use its size against it by ducking into places it can't follow, but larger animals may be forced to find another way. Stamina Jerky might help, or you may just draw in even more unwanted attention. Unlike the Deinonychus, the Dilophosaurus's defense is not easy to break and its own attacks are fast and extremely devastating. They also have the special enemy skill Pack Call, which will allow them to call in more Dilophosauruses as reinforcements if they spot a target. If they do intend to call, it's best to take out the Dilophosaurus before it can finish.

Some Dilophosaurus tear at a buffalo.

A Dilophosaurus wakes up after a rest.

An ERC-X eats from a Dilophosaurus' dead body.

Dilophosaurus attack.
Add a photo to this gallery 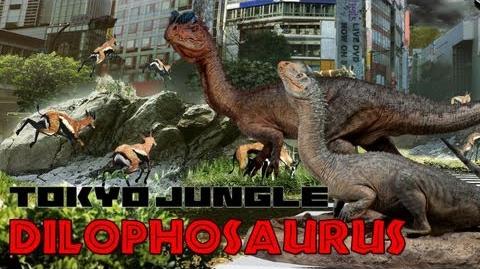 Tokyo Jungle Dinosaur - Dilophosaurus
Add a photo to this gallery
Retrieved from "https://tokyojungle.fandom.com/wiki/Dilophosaurus?oldid=7884"
Community content is available under CC-BY-SA unless otherwise noted.