The giraffe is unlocked by purchasing DLC

The giraffe is an African even-toed ungulate mammal, the tallest living terrestrial animal and the largest ruminant. Its chief distinguishing characteristics are its extremely long neck and legs, its horn-like ossicones and its distinctive coat patterns.

Life as a Giraffe

The Giraffe is a DLC Pack #2 size 6 grazer available for purchase. The Giraffe's best base attribute is its Life, but given its average Attack and Defense, it is not well equipped for intense open combat. The Giraffe also has a low average speed, so fleeing can also prove difficult, and it may take a bit of work to keep the Giraffe alive into the later years.

Even in the mid to later years, Giraffes are a very rare sight. When they are spotted, it is typically in the territories around Yoyogi Park where rare animals will often gather. They'll usually ignore smaller predators that shouldn't be able to clean kill them unless they attack first. Giraffes are the targets of larger predators, as they're worth a nice amount of calories if they can be taken down.

An angry beagle chases a giraffe.

A giraffe being hunted by two tosas jumps into the air to escape.

A giraffe wearing a straw hat. 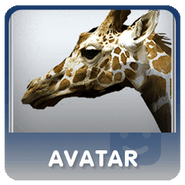 The giraffe avatar.
Add a photo to this gallery
Retrieved from "https://tokyojungle.fandom.com/wiki/Giraffe?oldid=7872"
Community content is available under CC-BY-SA unless otherwise noted.